A historic symbol of gratitude is receiving repairs and renewed interest and appreciation from the community.
The boxcar displayed in front of the J.D. McCarty Center for children with developmental disabilities in Norman is undergoing repair work that includes new boards, a fresh coat of paint and new decals.
The boxcar represents a historical donation made in the late 1940s from France to the United States. It is one of 49 WWI-era boxcars - known as the "Merci Train" - that were sent as a gift from France to show gratitude for donations of food and supplies from Americans, according to www.mercitrain.org.
Taking on the restoration project are volunteers from the Second Ward of The Church of Jesus Christ of Latter-day Saints in Norman, who are working with employees from the McCarty Center and the Cleveland County Habitat for Humanity on the boxcar repairs.
"It sounded like a neat project to do," said Walter Hobbs, elder quorum president with the Second Ward at 1506 W. Imhoff Road.
“Service is inherent in who we are," Hobbs said. "It's what we teach and what we do."
Hobbs said the project also is an opportunity for volunteers to learn more about the McCarty Center and the background of the boxcar located at 2002 E. Robinson St.
The McCarty Center has “a fascinating history, and the history dovetails with this boxcar,” he said.
The McCarty Center − which is celebrating its 75th anniversary this year − is a pediatric rehab hospital that specializes in the care and treatment of children with developmental disabilities from birth to age 21.
The center was founded in 1946 by the 40 et 8 of Oklahoma, a veterans’ organization. The center provides medical care and physical, occupational, speech and language therapy for children on an inpatient and outpatient basis.

A symbol of goodwill
The boxcar has long served as a beacon welcoming visitors to the McCarty Center but also represents an act of benevolence between countries and a unique story about a caravan of kindness.
In 1947, American newspaper columnist Drew Pearson wanted to help those in war-torn Europe, so he rallied Americans to donate food, clothing, medical and other supplies to assist people in France and Italy. His plan involved sending a train across the United States to solicit donations, according to www.fortyandeight.org.
The train was known as the “Friendship Train” and the effort generated an enthusiastic response from Americans who donated $40 million worth of goods.
Andre’ Picard, a French WWI veteran and a railroad worker, was impressed by the generosity shown from America and wanted to respond. He and members of the French Veterans Association chose to send 49 WWI-era boxcars, each filled with mementos from people in France, to the United States.
The boxcars arrived in New York City in 1949 and became known as the “Merci Train." One boxcar and its contents was donated to each of the then-48 states with one shared by the District of Columbia and the then-territory of Hawaii.
“Today, Oklahoma’s boxcar stands at the J.D. McCarty Center as a testament to these two incredible displays of goodwill,” said Joseph Steil, a member of the 40 et 8 of Oklahoma and a member of the Cerebral Palsy Commission, the governing board of the J.D. McCarty Center.
Artifacts from Oklahoma’s "Merci Train" are housed in the collections at the Oklahoma History Center in Oklahoma City.

Through the years, repair work has taken place on the boxcar at the McCarty Center, such as a new roof and the recent addition of an awning.
However, center officials wanted to do a complete refresh of the boxcar, including a new paint job, replacing boards and installing new decals, said Erik Paulson, center finance director and project coordinator.
Paulson said administrators began looking to outside groups who could help with repair needs, which led them to contact representatives with Cleveland County Habitat for Humanity.
Paulson started working with Matthew Allen-Morgan, volunteer coordinator with Habitat for Humanity, on volunteers who might be interested in the effort.
Allen-Morgan said Hobbs and other church members from the Second Ward are active volunteers with Habitat for Humanity and always show a willingness to lend a hand on projects.
Hobbs and the church group have worked on the boxcar during a series of Saturdays in July and August. The first work day included families from the church who were washing the railroad ties and scraping paint from the boxcar.
"It's fun," said Adali Spray, 9, who was busy scraping paint.
And what makes it so fun? "Doing work and helping others," she said, as she resumed her task.
Valerie Satterthwaite was washing metal underneath the boxcar, and was joined by her two sons who were helping scrape paint.
"It's good for my soul," Satterthwaite said about volunteer work. "Whatever you can do to help in the community is a good thing."
Volunteer Matt Despain climbed on a ladder to scrape paint near the top of the boxcar. He said he enjoyed helping the center and learning more about the boxcar’s history.
"It's a nice connection preserving that knowledge and heritage," Despain said about the project.

Founding organization still involved in center’s work
In 1946, a group of veterans joined together to create a place that could serve children with cerebral palsy.
Their vision has grown into what is now the J.D. McCarty Center for children with developmental disabilities.
This year, marks the 75th anniversary of the founding of the center by the 40 et 8 of Oklahoma. The center initially offered treatment to children with cerebral palsy but the mission later expanded to serve children with a variety of developmental disabilities.
The center takes its name from the late J.D. McCarty, a state legislator whose support helped pave the way for the center’s expansion and designation as a state agency in 1948.
The 40 et 8 of Oklahoma remains connected to the McCarty Center through service and support.
Members of the Cerebral Palsy Commission, the center's governing board, include members of the 40 et 8 of Oklahoma. In addition, the veterans’ organization also hosts an annual Christmas party for the patients and is involved in center events and programs.
Supporting programs for children is one of the outreach efforts of the 40 et 8 on the local and national level. Other activities and efforts from the organization include conducting flag education programs, offering scholarships for nurses and scholarships for descendants of service men and women who were prisoners of war or missing in action, according to www.fortyandeight.org.
Camaraderie among veterans and service to others are vital components of the organization’s work and history.
The 40 et 8 was founded in 1920 by American veterans returning from France and was originally an arm of the American Legion before becoming an independent and separate organization.
Names, titles and symbols of the 40 et 8 are derived from the French boxcars that were used to transport American soldiers to the front.
“These wartime boxcars held 40 men or 8 horses. They were emblazoned with a ‘40/8’ symbol, which was readily understood by American veterans of that era,” said Joseph Steil, a member of the 40 et 8 of Oklahoma and a member of the Cerebral Palsy Commission, the governing board of the J.D. McCarty Center.
“Today 40&8’s titles are in French, and we meet in symbolic WWI train depots, in grateful homage to the sacrifices of our Doughboy founders and, indeed, to honor all Americans who yet serve,” Steil said.
For more information about the 40 et 8, visit www.fortyandeight.org. 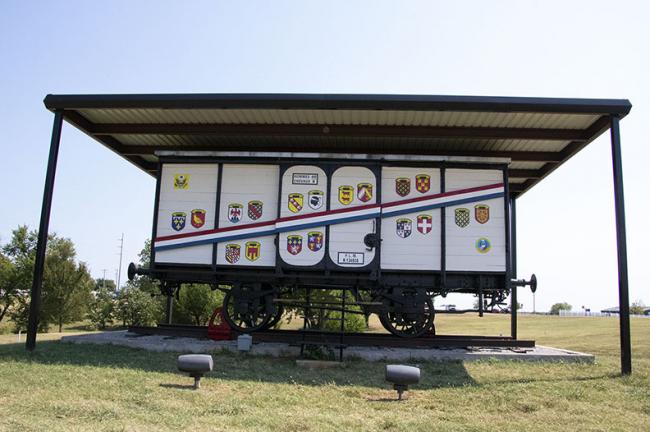