Serving children with disabilities and their families has guided Vicki Kuestersteffen’s career path.
Kuestersteffen envisioned opportunities, programs and outreach efforts that could help kids. That desire to assist and advocate is what led to her work at the J.D. McCarty Center for children with developmental disabilities in Norman.
Kuestersteffen, center director, retired this summer after working 31 years at the hospital. She served as the director for 12 years and also is the first female director in the center’s 76-year history.
“The children the J.D. McCarty Center serves are so special and immediately touched my heart,” Kuestersteffen said. “I wanted JDMC to be a support to the children and families we serve and believed in our mission so strongly that I knew I wanted to have JDMC as a significant part of my life for a long time.”
The McCarty Center is a pediatric rehab hospital that specializes in the care and treatment of children with developmental disabilities from birth to age 21. The hospital provides medical care and physical, occupational, speech and language therapy and Applied Behavior Analysis therapy for children on an inpatient and outpatient basis.
Colleagues said Kuestersteffen showed a deep devotion to the patients, worked to expand the outreach of the center and encouraged a team spirit among center employees and departments. Co-workers also applaud her leadership during the COVID-19 pandemic and her decision to enact protocols and precautions to better protect the patients at the center.
“Vicki obviously loves the center, its staff and its patients, and that love has shown in her leadership of the center,” said Karen Rieger, a former member of the Cerebral Palsy Commission, the center’s governing board.

Helping children across the state
Kuestersteffen had worked at area hospitals before coming to the McCarty Center in 1991 as a dietitian. She quickly became passionate about her work with the patients.
“The children bless me every day with their unconditional acceptance and love,” she said.
She also worked as the Quality Assurance and Performance Improvement coordinator, rehab director, deputy director and later director at the center. Her roles may have changed through the years, but her goal to enhance and advance programs and services for the patients remained consistent.
“Vicki has been a champion of children with developmental disabilities during her tenure,” Rieger said. “Her work to expand the outpatient services and outreach programs offered by the center has greatly benefitted many children across the state.”
Some of the programs Kuestersteffen started were the outpatient and teletherapy programs and the development of Camp ClapHans, a residential summer camp at the center. Kuestersteffen also recruited Board Certified Behavior Analysts to start the center’s Applied Behavior Analysis program.
“I think what the programs all have in common are identifying, developing and implementing programs that are designed to reach more of Oklahoma’s children with special needs and support them throughout their life,” she said. “I think that is what I am most proud of what the center has accomplished, and that the center is an environment where the staff not only care and support the kids but also each other.”
Joseph Steil, a member of the Cerebral Palsy Commission, said he was impressed with Kuestersteffen’s knowledge about employees and how she would take time to talk about their successes and dedication to the center during staff luncheons and celebrations.
“This was a strength because it showed that Vicki cared about every employee,” Steil said.
Mike Powers, the center’s new director, worked one-on-one with Kuestersteffen for 10 years and said she taught him to look at the center as a whole and how that team approach could make positive impacts. Powers also describes her leadership as fearless. “Vicki was never afraid to make a tough decision.”
Powers adds, “I think the biggest thing I learned from her is how to see the big picture and how each department and service that we offer ties together.”

Navigating through a pandemic
Steil said Kuestersteffen’s leadership during the COVID-19 pandemic was invaluable.
“Vicki can make a decision based on the current facts but isn’t afraid to change or modify her views as new data comes forward. This was demonstrated by her leadership during the COVID pandemic,” Steil said. “She modified precautions at JDMC based on the available data and modified those precautions as warranted.”
Some of the center’s pandemic precautions included mask and screening policies, COVID testing and offering vaccines to employees and the patients.
Bruce Jennings, a member of the Cerebral Palsy Commission, also commends Kuestersteffen’s handling of the pandemic at the center.
“Her leadership from the very beginning of the COVID-19 pandemic was on full display as she used her knowledge to research the threat and implemented plans to protect the patients and staff,” Jennings said.
Colleagues said that Kuestersteffen led the center with a heart for others, intelligence and a commitment to furthering the services offered to children with disabilities.
“Under her leadership, we expanded programs at a time when the state was not in good fiscal health, which is pretty incredible,” Powers said. “She also set up a leadership team that will be able to guide the hospital over the next couple of decades.”
Kuestersteffen said she believes the center is under strong leadership.
“The center is heading in an incredibly great direction,” she said. “Mike Powers and the leadership team will always have the heart and best interest of the children in mind as the center grows.”
Kuestersteffen said she also believes the center will “continue to find innovative ways to reach and positively impact children with developmental disabilities.” 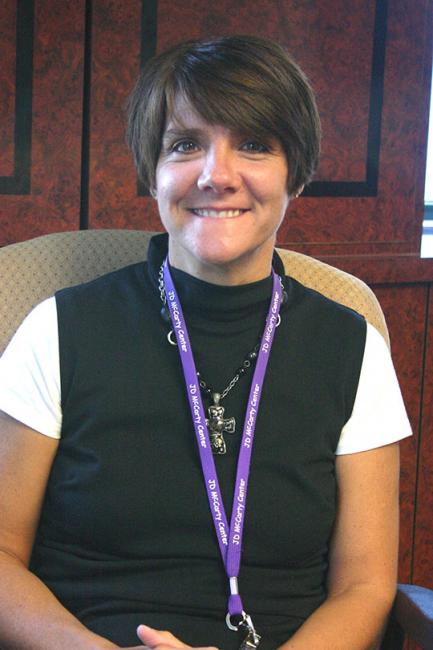